The next big trip in my quest to bring Age of Empires II: Forgotten Empires around the world. This time it was the wonderful Hungary, also known as Magyarország in their local language. Or as you might have guessed: the Magyars. Indeed, the Magyars could finally lay their hand on one of the new civs in AoFE, representing their own glorious nation in the Middle Ages. Needless to say the pressure was on, since I still have some doubts on some of the features of the Magyar civ. A lot of the guys in the beta team really love the Magyars, while I’m still convinced that they miss something. Even though it’s hard to tell what exactly. However, the feedback was mostly, if not unanimously positive!

We kicked off the night with some AoC games, after which I gave a short presentation on AoFE. I think I made it a bit too short, forgetting to explain many of the new features in the game, but okay, lesson learned for next party. It was also nice to see that they could appreciate my lame jokes: 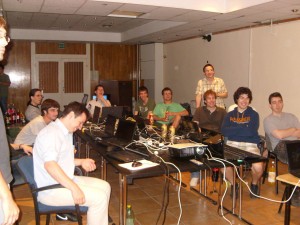 After my ramblings, there was a gala match between the 2 best Hungarian players present. Projected on the big screen we could all witness a quite thrilling Magyar vs Inca war. Stacked with many comebacks and the joy of seeing the best players slowly discover the bonuses of the new civs. If it might be of any concern, in the end, the Incas won 😉

The rest of the night was filled with nice matches of AoFE, good drinks and fun chats with the other people around. Also loads of bug reports, but that’s only for the better of the game ofcourse. Here’s a picture of my neighbour TLW_WOodoo, playing in a 4v4 with Incas, trying to push back an Italian empire out of the Arabic plains. 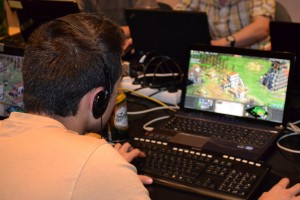 Oh, and a cool picture with some of the guys to end my resume! Thanks again to the Hungarian community for taking the effort to organize this! 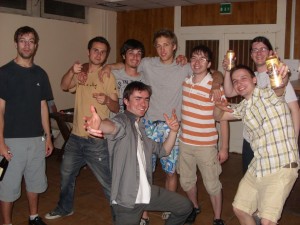 After this I went with Richard, who had a spare bed in his dormitory, here I could spend the night and I would have a starting point to discover the city in my remaining days in Budapest. It was the second time I visited the city, but still a little tired of the night before and knocked down by the big hard sun, I decided to go for a comfy, lazy, touristy tour of the city, instead of exploring the odds and ends I didn’t manage to cover last time.

I started off with the obligatory parliament, the largest in its kind and also the most famous landmark of the city.

I think I took about 20 shots of the building, from many different angles. Even if I didn’t want to focus on it, it would still appear many times in many different pictures.

From here I crossed the Chain bridge, another landmark, to the other side of the Danube (Duna in Hungarian), for the Buda Castle. A complex that stretches out over the whole hill of Buda, containing palaces, churches, castles and generally important buildins. The highlights are the super tourist Fishermen’s quarter and the Mattias Church. The latter was being renovated, so I decided not to go inside to see a bunch of sweaty construction workers. 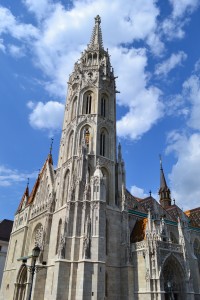 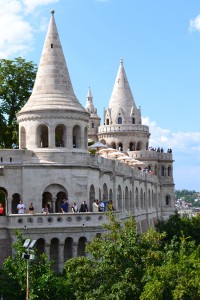 Last but not least, I ran across a bunch of Magyar characteristics that can be found in Age of Empires II: Forgotten Empires. First of all, the Magyar wonder! The original Magyar wonder is Hunyad castle, located in nowadays Romania. But the Hungarians built their own copy of the castle in Budapest. I simply had to go check it out. And indeed, although the setting and the surroundings are different, the original and the copy bear a strong resemblance. You can also see the good work done by 1302, a Belgian AoC fan and occasional graphic artist who made the Magyar wonder for AoFE. 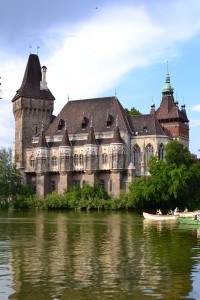 On the end of my journey, which surprisingly ended around the parliament again, I ran into an exhibition of the Hungarian defense forces. It included a Magyar Huszar and recurve bows, both of which will be present in AoFE. Needless to say, the guy with the recurve bow shot it while sitting on a tank. Completly defeating the purpose of the machine.